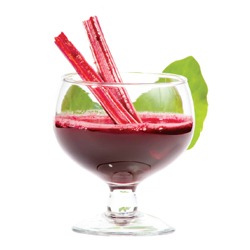 A group of scientists from Exeter University, Great Britain, found out that nitrate in beetroot created reduction in the absorption of oxygen and made sports less tiring. The research that was published in the Journal of Applied Physiology magazine was carried out on men between 19 and 38 years old… They were given 500 ml organic beetroot juice every day for six days. Then, tests covering various sports activities were implemented. Later on, these people were given blackcurrant juice as placebo for 6 days and the same tests were applied.

The research group was able to cycle for an average of 11.25 minutes after drinking the beetroot juice. It was determined that this duration was 92 seconds more than the test carried out after they were given the placebo. Although the researchers could not make out nitrate’s mechanism for increasing the resistance, they came to the conclusion that nitrate turns into nitric acid in the body and as a result of this the oxygen burnt during exercise is reduced.

Researcher Prof. Andy Jones, acting as consultant to an athlete in Great Britain, said, “We were surprised by the effect in the absorption of the oxygen of the beetroot juice because this effect cannot be obtained by any way including training. I think both the amateur and professional athletes will be very much interested in the conclusion obtained as a result of this research.”

This website uses cookies to improve your experience while you navigate through the website. Out of these, the cookies that are categorized as necessary are stored on your browser as they are essential for the working of basic functionalities of the website. We also use third-party cookies that help us analyze and understand how you use this website. These cookies will be stored in your browser only with your consent. You also have the option to opt-out of these cookies. But opting out of some of these cookies may affect your browsing experience.
Necessary Always Enabled
Necessary cookies are absolutely essential for the website to function properly. This category only includes cookies that ensures basic functionalities and security features of the website. These cookies do not store any personal information.
Non-necessary
Any cookies that may not be particularly necessary for the website to function and is used specifically to collect user personal data via analytics, ads, other embedded contents are termed as non-necessary cookies. It is mandatory to procure user consent prior to running these cookies on your website.
SAVE & ACCEPT