Tiger Woods, the Emperor of the Green Lawns 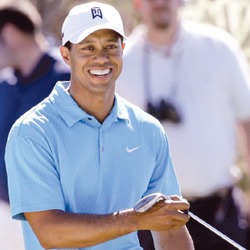 Tiger Woods, the Emperor of the Green Lawns

The only ruler of the green carpet, Tiger Woods, is the sportsman that earns most money in the world has established his own museum with his awards and the cups he won. Being one of the best golfers of the world, Wood has a fortune of more than 1 billion dollars.

Being in the mid-thirties, Eldrick (Tiger) Woods has made a mind boggling career in golf since he took it up in the summer of 1996. Being the winner of more than 65 tournaments, Woods held up cups in British Cup in 1997 2000 and 2005. With the 2 masters Woods won in 2001, he was the first name who held 4 professional cups in his hand at the same time. Having victories more than any other people in PGA TOUR, Tiger Woods is again the winningest in the money list, as well.

One of the most important successes of Tiger came in 2000. Tiger equalized the record broken by Ben Hogan, one of the legendary golfers, in 1953 by winning in the three big tournaments in the same year. Hogan had also won Masters USA Open and Britain Open in the same year. Tiger was also successful in equalizing the records broken by Denny Shute in 1936 and 1937 by winning in the PGA championship one after the other. BY winning the Britain Open, Tiger became the youngest name that collected the Grand Slams and in total, he has been the 5th name that put his signature under this success story after Hogan Gary Player and Jack Nicklaus.

Tiger has also been the youngest champion ever of the Masters. It was only three months and 14 days after Tiger started 21 when this young man held up the Masters cup. The USA Open and the Masters victories came up with record differences, as well. Reaching the cups with 15 and 12 throw difference, Woods buried the 138 year old record into history. Old Tim Morris had a throw difference of 13 in Britain Open in 1862. The person who made the best start for PGA before Tiger was Horton Smith. Smith won 8 PGA victories in 1929 when he was 21 and in 1931 when he was 23 he was able to reach 15 career victories. Woods proved that he was on the way of becoming a legend by obtaining 11 victories, 8 of which were PGAs in 1999, when he was 23.

Being continuously compared with Nicklaus, Wood also overcame this situation. Nicklaus had won 17 cups (12 of which were PGAs) in 1964 when he was 24 and had been playing as professional. Wood’s 6 professional big cup victories and 3 USA Amateur cups made him own a total of 9 big cups when he was 25. This meant that he had 3 more big cups than Nicklaus when they were the same ages. Nicklaus had 4 professional big cups and two USA Amateur cups. Woods owned the most striking amateur statistics of the golf history. Winning 6 USGA national cups, Woods also owned the title of NCAA. While he was doing these, he was not even a professional. Woods became a professional on 27 August 1996. He won USA Amateur cups for consecutive three years and completed 18 consecutive matches as leader. He won the USA Youth Championship when he was 15 in 1991 and was the youngest person who could achieve this success. Woos also won the USA Amateur in 1994 when he was 18 and was the youngest person who could achieve this success.

He is the son of Earl Woods, a retired lieutenant colonel in the U.S. Army, and his wife, Kultida, a native of Thailand. He was nicknamed Tiger after a Vietnamese soldier and friend of his father, Vuong Dang Phong, to whom his father had also given that nickname.

He entered Stanford University in 1994 and in two years, he won 10 collegiate events, concluding with the NCAA title. His other amateur victories included the 1994 Western Amateur. He represented the United States in the 1994 World Amateur Team Championships in France and the 1995 Walker Cup Match in Wales.

He played his first major championships in 1995, making the 36-hole cuts in The Masters and the British Open, but had to withdraw from the U.S. Open because of an injured wrist. Playing in two big tournaments in 1996, Woods proved with his performance that he was becoming a very important golfer.

The week after winning his third U.S. Amateur title, Woods played his first tournament as a professional in the Greater Milwaukee Open. It was one of only seven events left for him to finish among the top 125 money winners and earn a player’s card for the PGA tour.

He won twice and placed among the top 30 money winners qualifying for the tour Championship. He finished 25th with $790,594 and won $940,420 for the year worldwide in total.

Starting 1997 in spectacular fashion, Tiger won the season-opening Mercedes Championships. Including The Masters, Woods won four PGA tour events and was the leading money winner (Arnold Palmer Award) with a then-record $2,066,833. He won $2,440,831 worldwide in 25 events.

He achieved No. 1 on the Official World Golf Ranking for the most rapid progression ever to that position. On June 15, 1997, in his 42nd week as a professional, Woods became the youngest-ever No. 1 golfer at age 21 years, 24 weeks. The previous youngest was Bernhard Langer, age 29 years, 31 weeks in 1986.

Leaving a bright year behind in 1998, in his third full season as a professional, 1999, Woods won eight times on the PGA tour, including the PGA Championship, and earned $6,616,585. He had a margin of $2,974,679 over runner-up David Duval, a figure greater than the previous single-year PGA tour record. His dominance was such that Woods won 52 percent of all the prize money he could have won. He won five times again on tour in 2002, and seven times worldwide, and was the tour’s leading money winner for the fourth consecutive year with $6,912,625 ($8,417,188 worldwide).

Sports Illustrated selected Woods as the 1996 and 2000 Sportsman of the Year, as he became the first to win the award more than once. L’Equipe (France) selected him as the 2000 World Champion of Champions. The Associated Press chose Woods as the Male Athlete of the Year for 1997, 1999 and 2000. He and Michael Jordan are the only athletes to win that award three times. He was chosen ESPN Male Athlete of the Year in 1997 (tied with Ken Griffey Jr.), 1999, 2000 and 2001. The founding members of the World Sports Academy, in voting for the Laureus Sports Awards, also selected him as the 1999 and 2000 World Sportsman of the Year. In 2008, BusinessWeek chose Woods No. 1 in The Power 100 for the most influential people in sports. Woods was selected as the 1997, and 2003 Player of the Year by the PGA tour. Woods succeeded in becoming the “legend” of golf before he reached 30.

This website uses cookies to improve your experience while you navigate through the website. Out of these, the cookies that are categorized as necessary are stored on your browser as they are essential for the working of basic functionalities of the website. We also use third-party cookies that help us analyze and understand how you use this website. These cookies will be stored in your browser only with your consent. You also have the option to opt-out of these cookies. But opting out of some of these cookies may affect your browsing experience.
Necessary Always Enabled
Necessary cookies are absolutely essential for the website to function properly. This category only includes cookies that ensures basic functionalities and security features of the website. These cookies do not store any personal information.
Non-necessary
Any cookies that may not be particularly necessary for the website to function and is used specifically to collect user personal data via analytics, ads, other embedded contents are termed as non-necessary cookies. It is mandatory to procure user consent prior to running these cookies on your website.
SAVE & ACCEPT